Eenigenburg Berry Farm was one of the earliest Blueberry farms started in DeMotte, IN. The first blueberry bushes were planted in the area in 1943 by a gentleman named John Sauer. A love of blueberries, a little dirt, and the right know-how brought about a farm that would be carried on from generation to generation.

Getting To Know Our Family and How It All Began

In 1943, John Sauer moved to a farm southeast of DeMotte from Cedar Lake, IN. He brought with him six blueberry plants which were the beginning of the large blueberry fields that you now see around DeMotte today. All because one man had a dream and a vision.

John did a lot of research on the type of soil needed and how to care for blueberries.  He then began doing rooted cuttings in peat moss in propagation boxes to start more plants and expand his fields. He became a licensed nurseryman in the state of Indiana which made it possible for him to sell plants. That is how many others in the DeMotte area got their start from those original six plants. 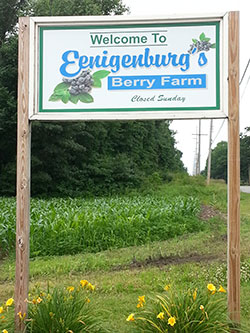 That is where the history of Eenigenburg’s Berry Farm’s began.

In 1948 Ernie and Alice Eenigenburg, who were friends of John Sauer, bought their first blueberry bushes and planted them on their small farm on the northwest side of DeMotte.  Ernie and Alice also had a dream and a vision and called their farm Eenigenburg’s Berry Farm. They began to expand and plant more bushes and people came from far and wide to pick blueberries. It was the beginning of a small farm in a small town that was started over 60 years ago and we are proud to still be family owned and in our fourth generation.

John Sauer decided to retire in 1956 and since Ernie and Alice had already established their love for blueberries and had started their farm on the north side of DeMotte, it didn’t take too much persuasion from Mr. Sauer for Ernie and Alice to purchase the Sauer farm and expand their dream.  They were now the proud owners of two Eenigenburg’s Berry Farms which are still both owned and operated by their children and grandchildren – the North farm and the East farm. 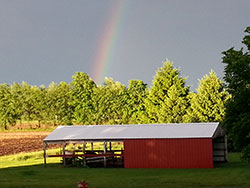 Ernie and Alice had five children: Bob, Pat, Rich, Donna and Shiela. The Eenigenburg kids all learned how to work hard on the farm. The oldest, Bob, married Barb, a girl from North Judson, who was also raised in the blueberry business. Because the business was growing and Alice wanted to concentrate on the North home farm, Ernie asked Bob and Barb to manage the East farm in 1968. Both farms continued to grow and more and more blueberries were planted.

The youngest daughter Shiela grew up out in the fields of the North farm. You could see her running around barefoot and chatting to the customers and even sneaking a snack from them while they were enjoying a picnic lunch. Every day was a fun day out on the farm.

In 1971, Shiela married (her high school sweetheart,) Jack DeBoer who was already working for Ernie. How convenient was that!!! 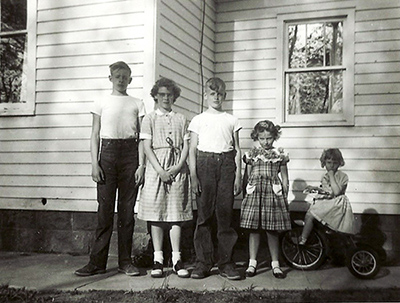 Ernie became ill in 1983 and asked Jack and Shiela if they would like to move to the North home farm and run it while Bob and Barb continued to run the East farm. Their answer was, of course, yes! Ernie and Alice were ready to spend more time in sunny Arizona. Ernie passed away in 1985. In 1990, Alice officially handed the reigns over to Jack and Shiela but she remained active on the farm in the summers as long as she could. She loved the business that they had built and she loved her blueberries. In 1994, Alice passed away. The Eenigenburgs were very proud to see their dream and vision continue with their children into the next generations.

The vision and dream continues to grow…

Jack and Shiela were the proud parents of four sons. Dan is the oldest and he is married to Marilyn (Bosgraaf) and together they have five children: Jacob, Heidi, Grace, Melanie and Benjamin. Then there was Brad who is married to Britanny (Cellarius) and together they have three children: Landon, Makayda, and Korra. A couple years later there was, Nathan, who is married to Patti (Musch). They have two children: Devin and Ashlyn. The youngest of the clan is Jason married to Tawnya (Williams) and they have two children: Emmett and Emily. The boys all grew up picking blueberries, helping to prune (which was not their favorite job), helping the customers, packing blueberries to ship to market and sell to customers, and – I think their favorite job – mowing. There was plenty of that to do! As of 2016, there are twelve grandchildren! Many of the older ones are involved in helping on the farm in various ways. Grandma Shiela also loves to go out and pick with the grandkids when she has time just like Grandma Alice did years before. Sometimes more end up in their mouths than in their buckets.

Shiela’s husband Jack DeBoer passed away in 2012 but the farm continues on with the help of the sons, daughter-in-laws, and grandkids. We are proud to carry on the dream and vision that Ernie and Alice started over 60 years ago – Eenigenburg’s Berry Farm’s – both now in their fourth generation.

We’re excited about the upcoming season so come out and visit us at the farm to help us keep the vision and dream going for many generations to come!